Designed by Lund Hagem, check out this amazing house built in Norway:

The site is located within 5 meters of the waters edge on a small island with large topographic differences. The site is exposed to prevailing winds from south –west, and as with so many sites along the Norwegian coast, it boasts a magnificent view. Access is limited to boat.

Consist of several small islands a boat ride away from Helgeroa.The islands are all relatively small with large height differences and exposed rock surfaces. Across narrow waterways hand built bridges connect the islands to create a continuous landscape, where the totality of the place becomes visible and inhabitable.

The topography of the site did not naturally lend itself to building and the existing house, that has been replaced, occupied the ridge of the island it stood on, the highest point and the only naturally horizontal surface there.

As a direct response to the location, the new house is located “next to” the island, occupying a low rock area that had no useful qualities apart from gathering up debris from surrounding areas. The building creates a site on stilts that latches onto the island to unite the new with the old. The new surface is then occupied with two volumes, one low volume housing bedrooms and bathrooms, and one taller roof spanning across to create a shelter for kitchen, dining and living. Floor levels undulate and respond to the joining rock and all circulation is outdoors. The new volumes sit naturally with the existing landscape and allow for free circulation and use of surround areas. The building seeks to enhance the qualities of the site and make use of areas that originally had no value.

The house is the structure in this case. The timber structure is all visible and forms the exterior as well as the interior. Glulam beams span from inside to outside and together with raw steel columns and a white concrete fireplace and bathroom shape and colour the interior. Solid galvanized steel columns (Ø64mm), which are drilled straight into the rock with no other foundation, carry the “new site” that the house sits on. The low volume is a simple post and beam structure, whereas the tall roof is a cantilevered structure carried on minimal posts with wind bracing solved at the gables in triangular elements in wood (also used for sun shading) that are bolted to the rock. 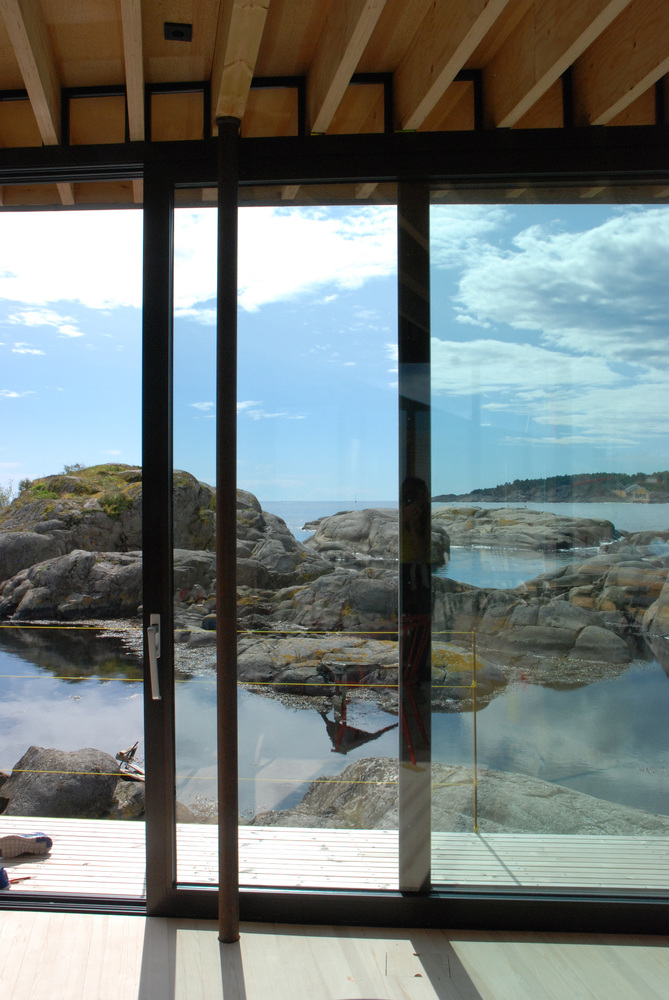 The exterior and interior walls are all clad in rough sawn ore pine, the same pine as used on the shuttering for the fireplace/bathroom. The exterior walls are divided in two categories, the interior/exterior walls consisting of narrow horizontal boarding and the exterior/exterior walls consisting of vertical wide (3xthe horizontal) boards. These wide boards as well as the roof are painted soot black to reduce the impact of the building seen from the surrounding as well as create a contrast to the naturally coloured walls along the facades towards the terrace and walkways. In contrast to the walls the floors are smooth ore pine.

The materiality of the interior in this case is treated as the exterior, to minimize the threshold between inside and outside, and further enhance the idea of the summer cabin as a place where you live in harmony with the surrounding landscape. 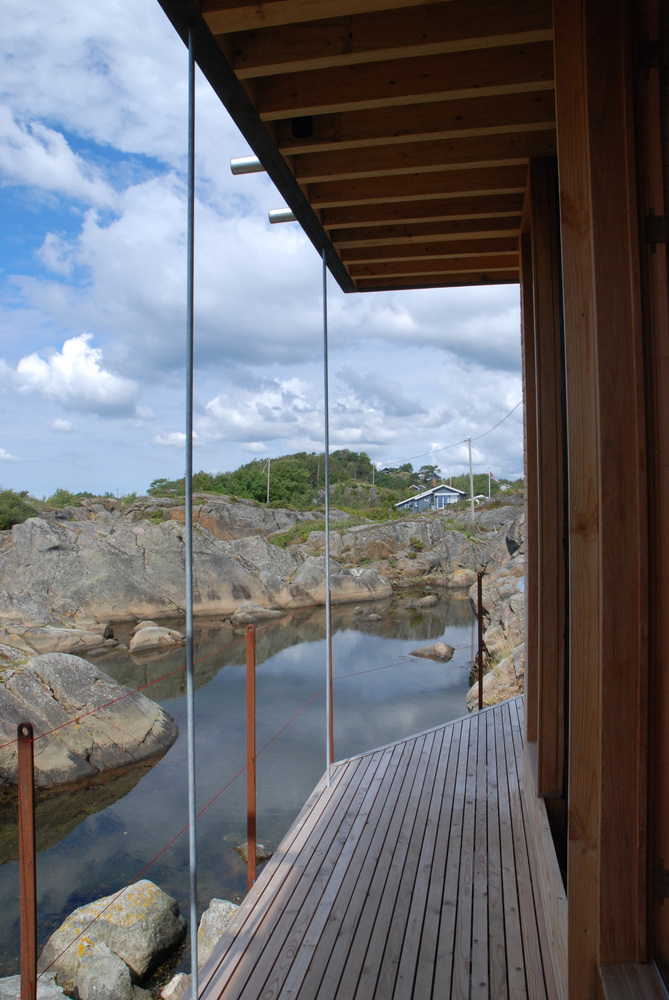 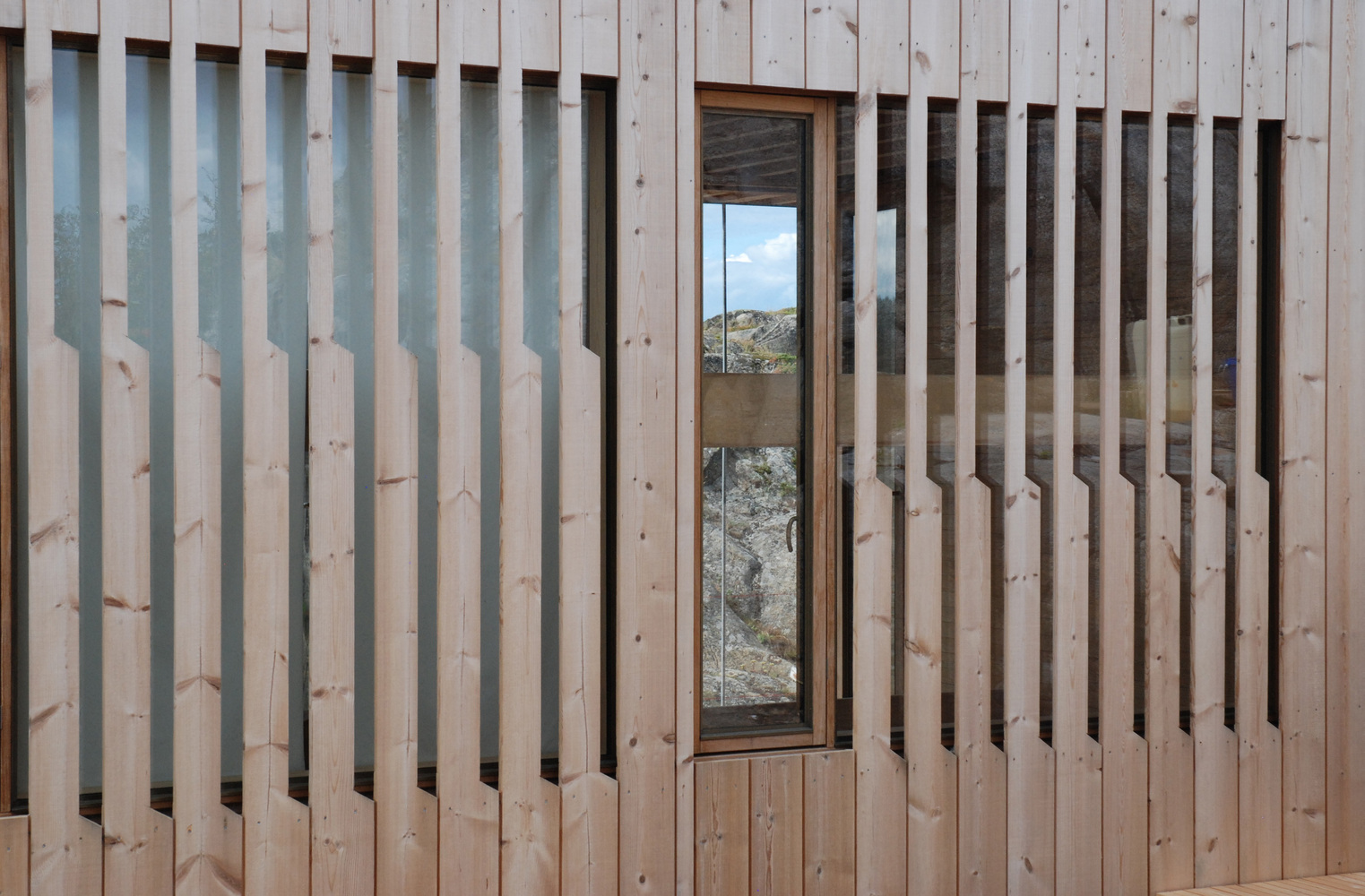 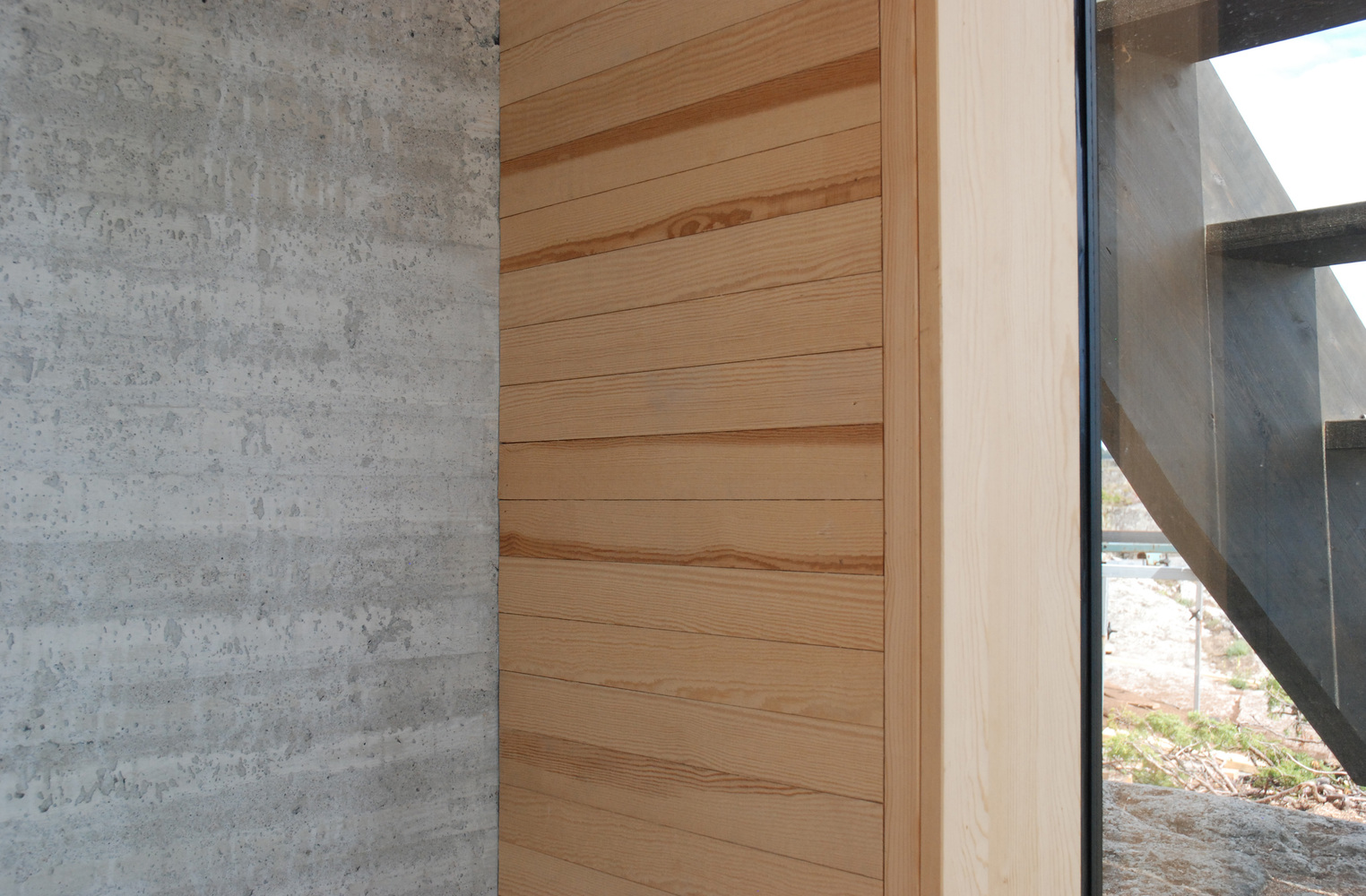 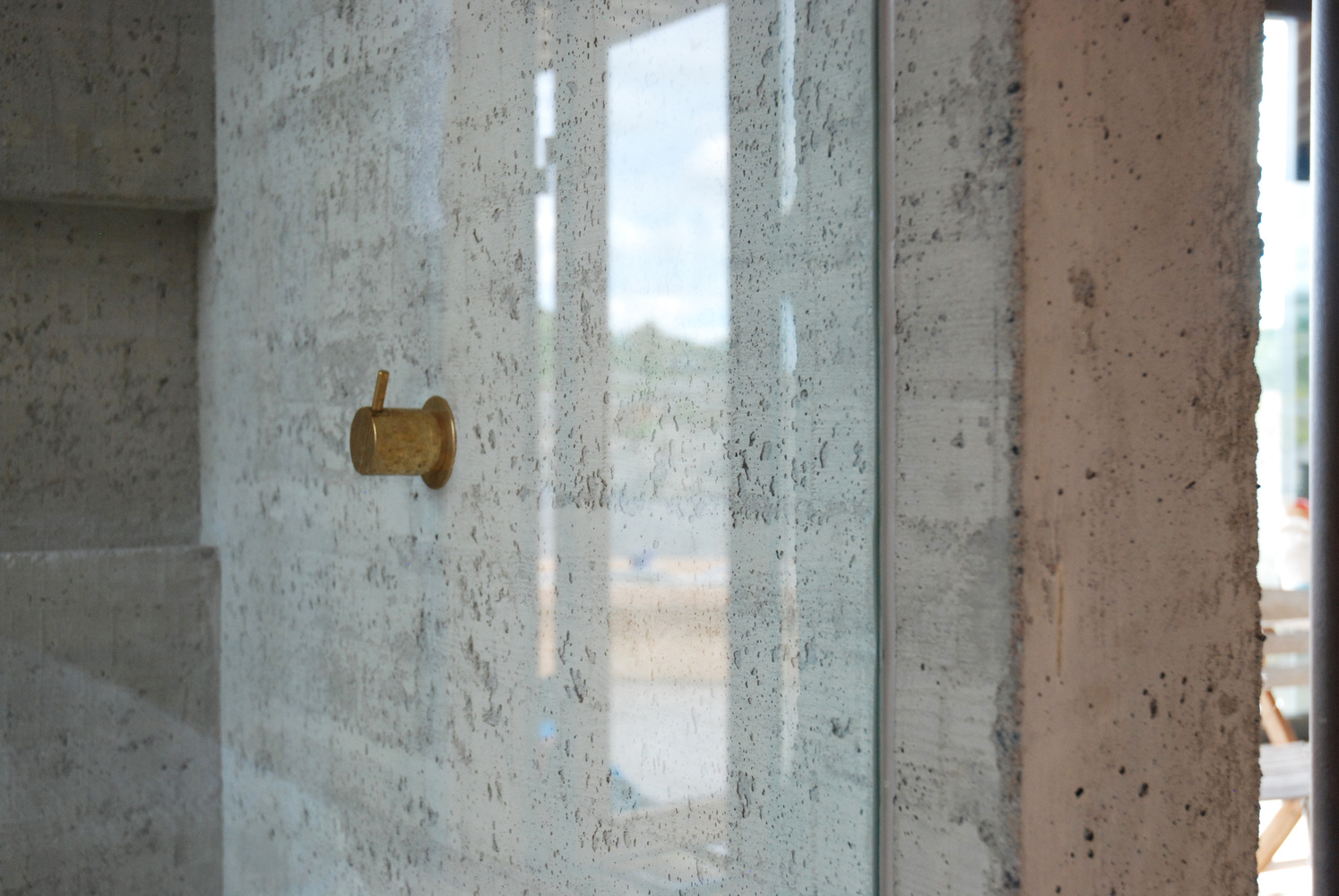 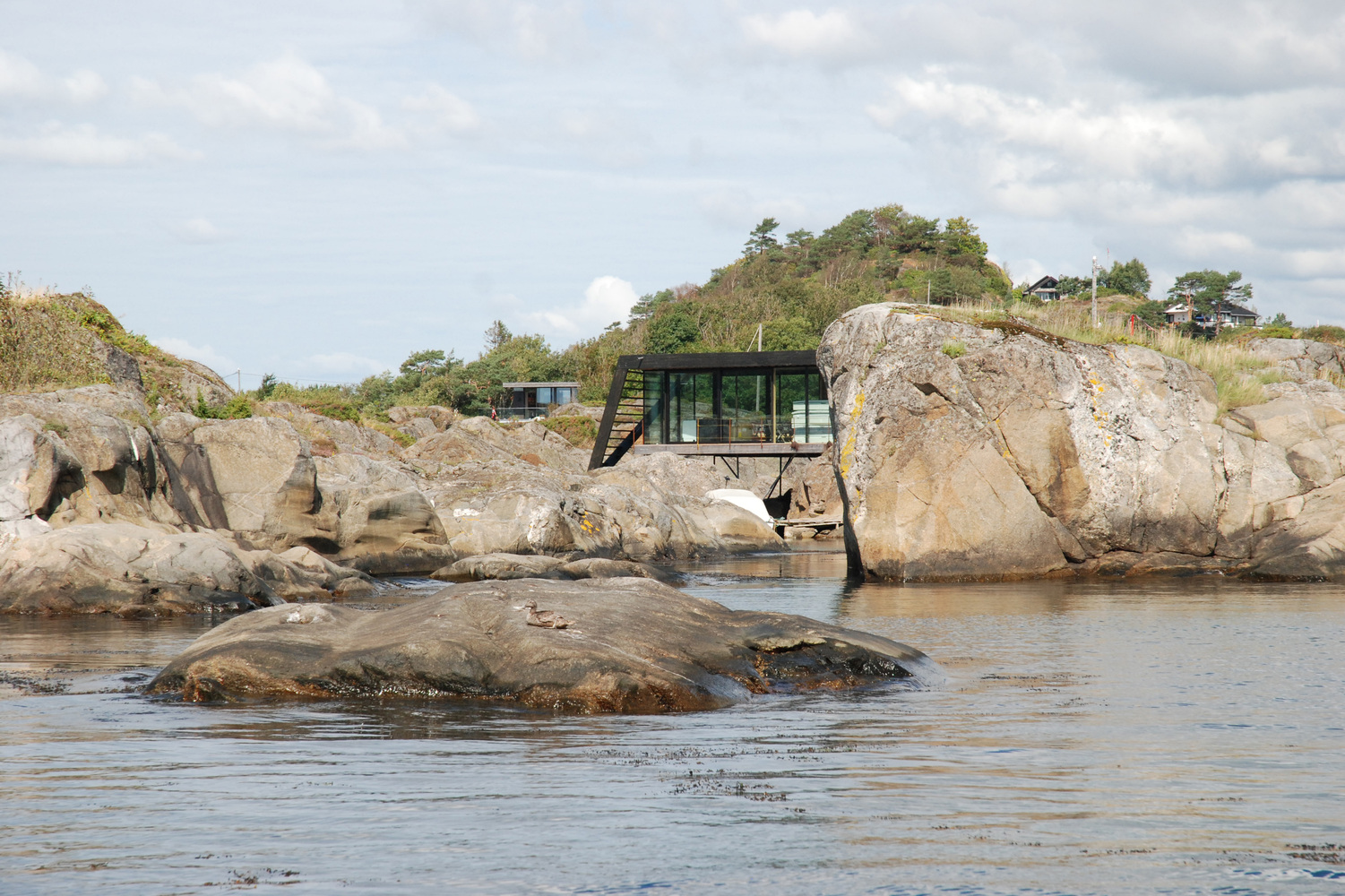