White Cube is pleased to present ‘Mandalas’, an exhibition of new work by Damien Hirst at Mason’s Yard. His first major show in London for seven years, it features large-scale works from the recent concentric paintings.

Returning to one of his most well-known motifs – the butterfly – Hirst’s new paintings take their inspiration from the mandala: highly patterned religious images that represent the cosmos or universe in Hindu, Buddhist, Jain or Shinto traditions. Predominantly circular, they feature exquisitely colourful butterfly wings placed into intricate concentric patterns on household gloss paint. Complex and restless, their compositions resolve at the centre with a single butterfly, a point of visual and mental focus; a spiritual or energy nexus.
The ‘Mandalas’ continue themes present in Hirst’s earlier ‘Kaleidoscope’ series (2001-present), foregrounding both the symbolic power of the butterfly and a sense of spiritual epiphany. Whilst the ‘Kaleidoscope’ paintings directly connect with Christian iconography – one collection was named after entries in the Book of Psalms, and others replicated patterns from cathedral stained glass windows – Hirst’s new work draws on specifically Eastern philosophical traditions. Like mandalas themselves, which are used as an aide to meditation, their complex and assertive visual power emerges through the integral relationship of part to whole, where an excess of detail opens up multiple visual connections and paths across kaleidoscopic compositions. In these works, the palette is restrained, often tonal explorations of a single colour, and a textural, painterly surface sits in tension with the strict precision of their overall layout. This is particularly evident in several ‘shade’ or near-black paintings included in the exhibition, such as the large-scale triptych The Creator (2019), installed along the back wall of the lower ground floor gallery, and Obscuritas (2019), in which a tapestry of rich, dark tones creates the effect of a receding three-dimensional vortex.

Hirst began working with butterflies as early as 1989 and they have featured consistently in his work since, inciting visceral and emotional responses in the viewer. As Rod Mengham has written in the catalogue to accompany the exhibition: ‘Hirst’s prolonged exploration of the life cycle of the butterfly, its spectacular visual appeal, the mythological and cultural formations it has inspired, and the variety of forms of response it has provoked in both artists and scientists, is one of the most thoroughgoing and many-sided conceptual projects sustained by any contemporary artist.’

A symbolic vehicle for reflections on beauty, mortality and existence, he has described the butterfly’s image as a ‘universal trigger’. By using their wings alone, isolated from their whole-bodied reality, Hirst points to an idealised beauty while, at the same time, co-opting their exuberant, natural patterning into ready-made elements within a systematic and methodical abstraction. Like the Victorian lepidopterist displays which originally inspired the butterfly works, the ‘Mandalas’ rely on a democratic and regularised approach to placement but, in the process, effect a form of rhythmic patterning, a Rorschach-like mirroring that emerges from iconographic organisation. 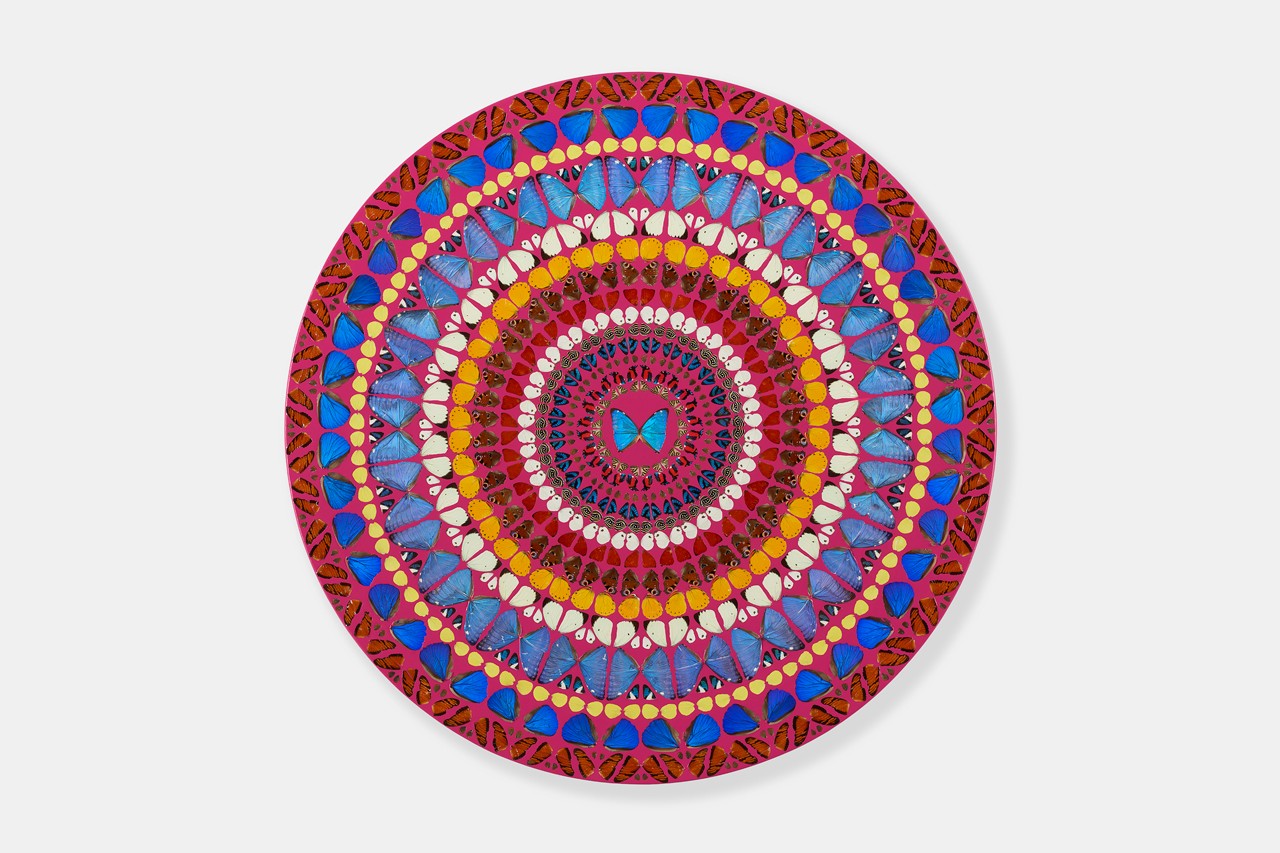 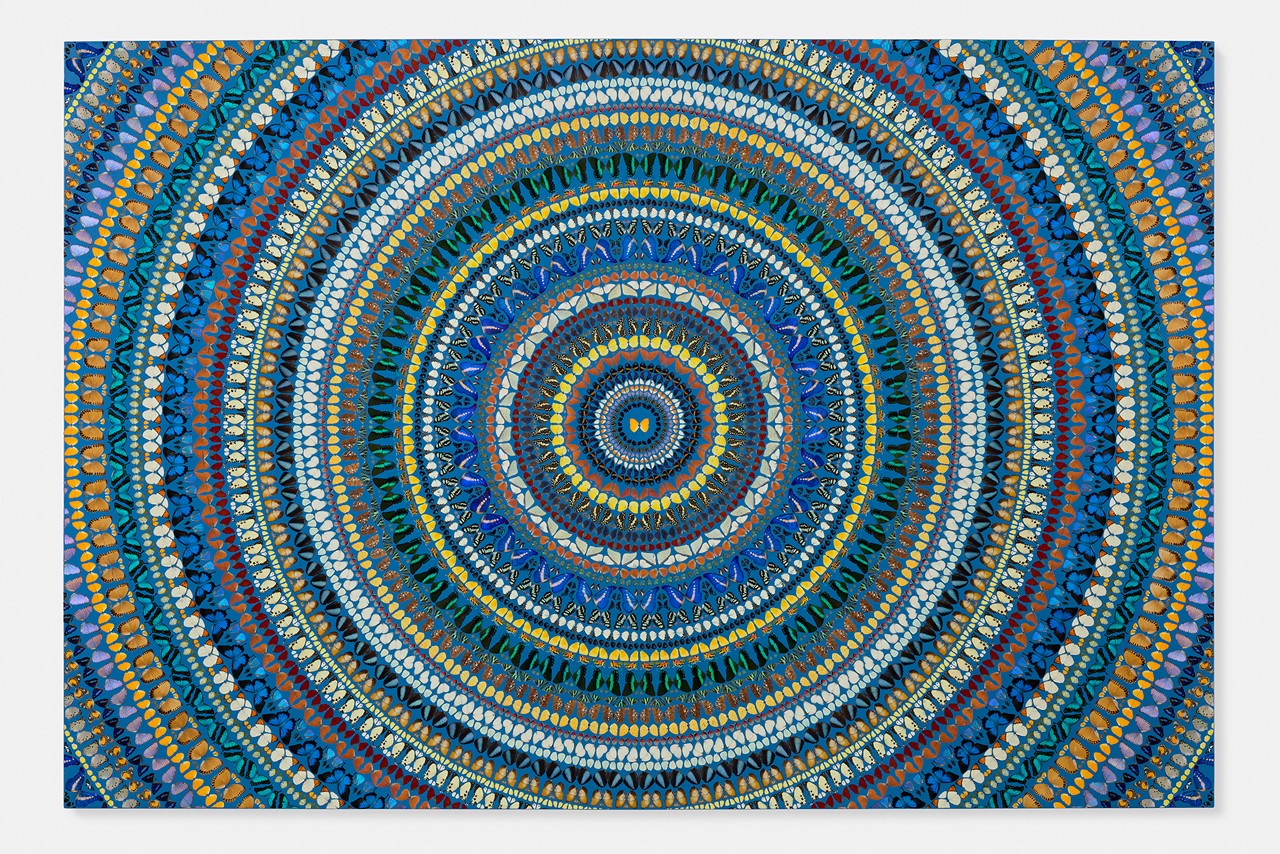 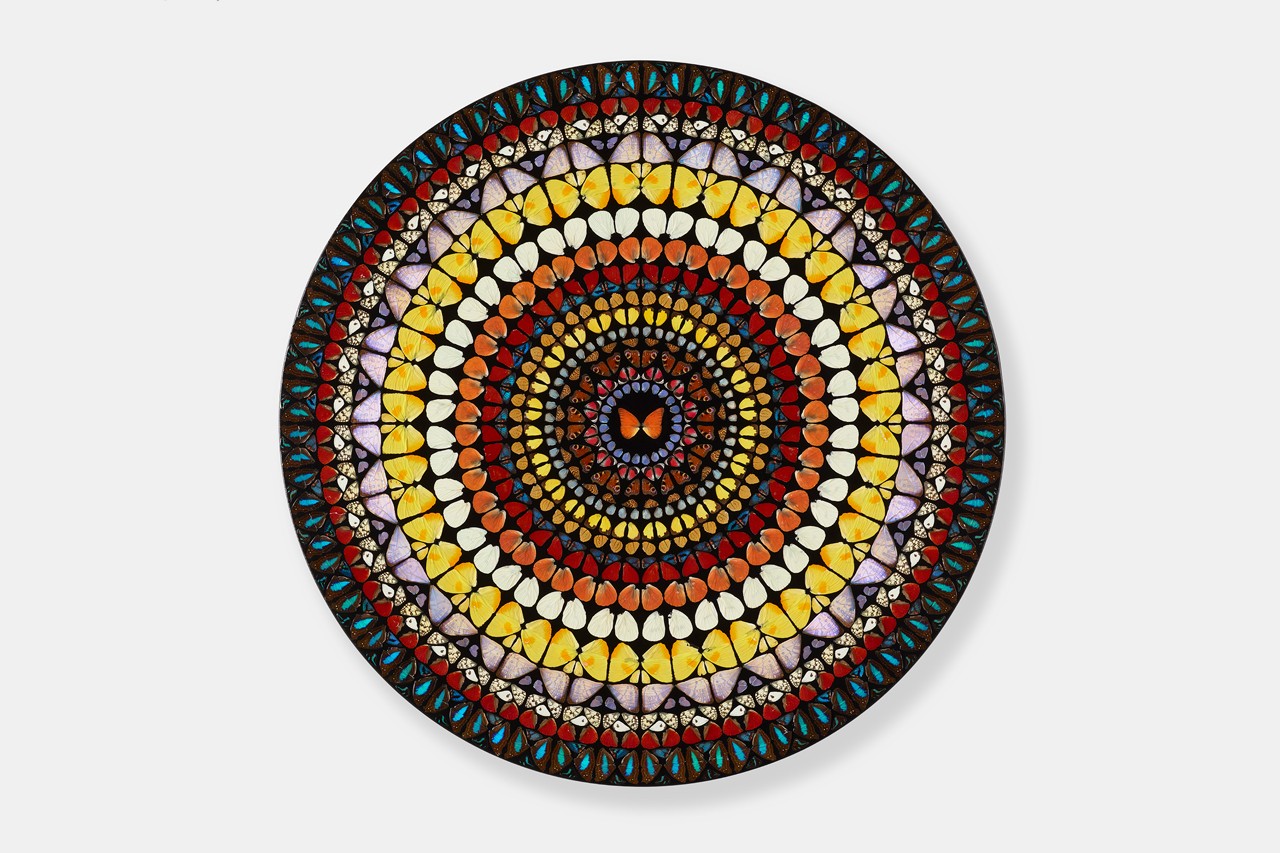 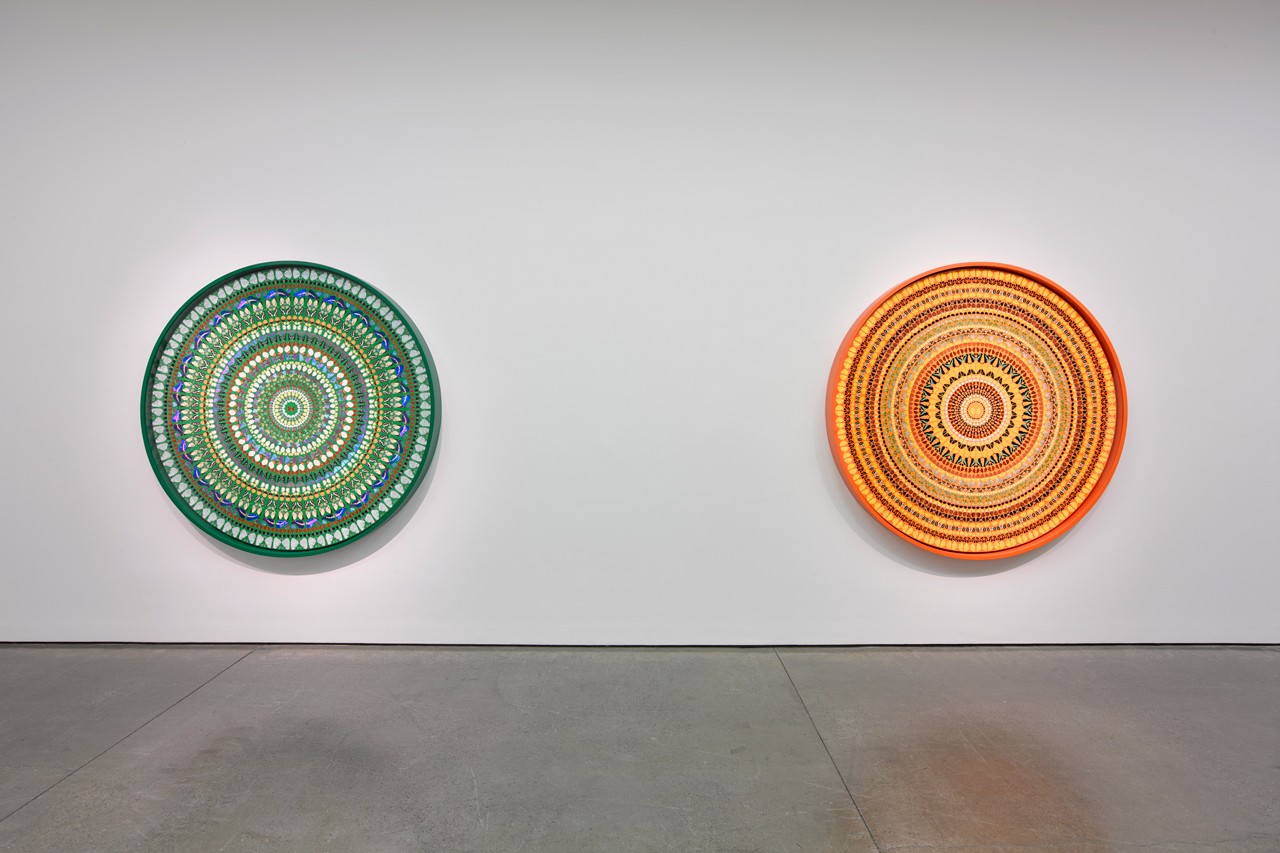 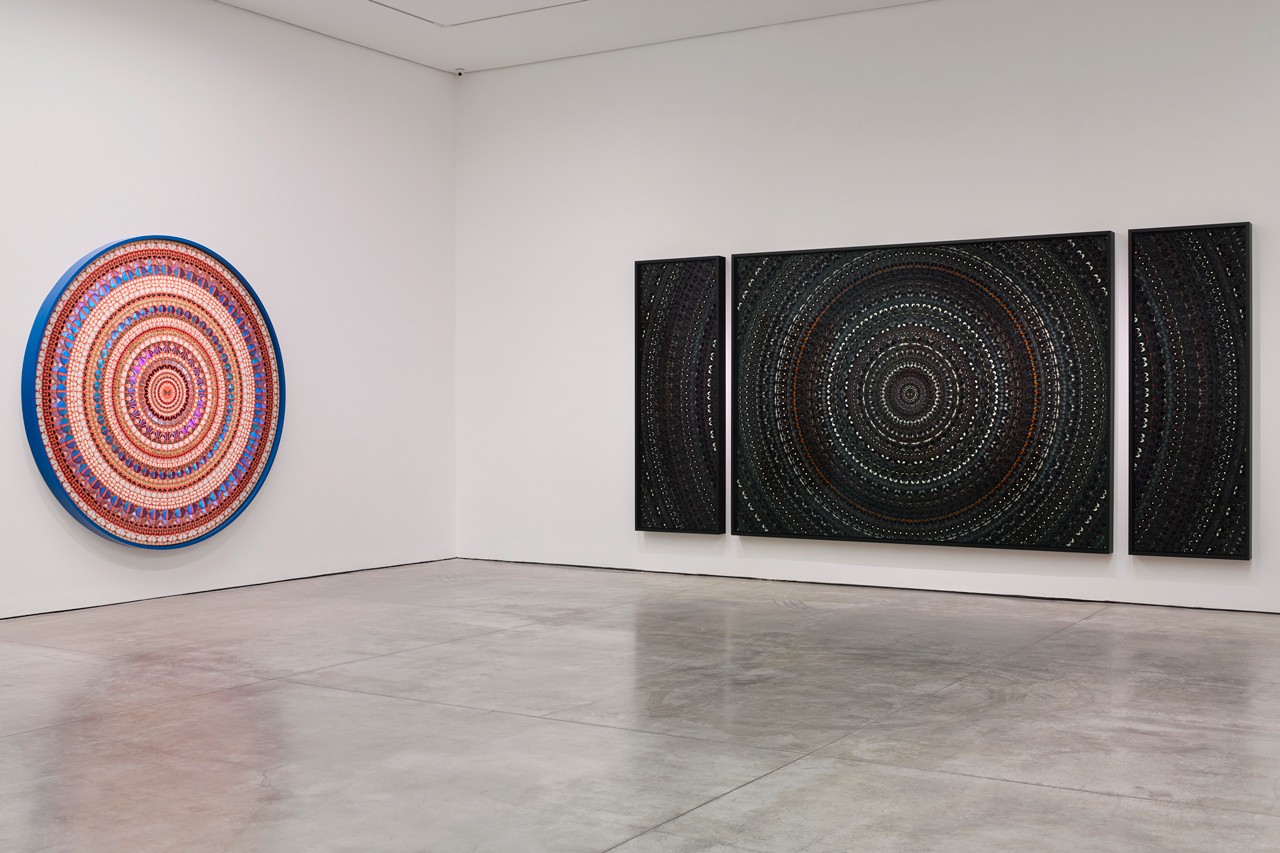