During an AI research project, I decided to dive deeper into the world of art and the possibilities of using AI as a tool within the creative sector. Another relating subject that interested me is how copyright should be considered when art meets tech – two worlds that I, working as an artist myself, decided to experiment with. This is what I discovered.

Artificial intelligence or AI are words most people have come across watching Sci-Fi movies or heard about on the news. More often than not, these topics concern the ethical questions around AI usage. Digitization is ongoing and drastically happening whether we like it or not. However, what is not spoken about too often is the importance of implementing machine learning and artificial intelligence using ethical regulations as it can support us in ways never thought possible. A few examples can be found in the health care sector, tools for fighting climate change, detecting crime, and making everyday life easier and safer. As all sectors are slowly digitalizing, I wanted to experiment within a field I find familiar – the creative sector.

Creativity, art and emotional outlets have oftentimes been perceived as something natural and human. At least to me, it’s always been. My idea of creativity has always been that it comes from our soul, or the right side of our brains. Supposedly, Albert Einstein should have said: “creativity is intelligence having fun”. This is a very flattering sentence to hear being a creative of some sort, although, the implication of it has changed drastically for me lately. I’m studying AI, which has left me curious and I keep asking myself plenty of questions. Should we fear AI being used to compose music and art for instance? or should we accept and embrace the fact that digitalization will happen in all parts of our lives, whether or not we are excited about it? Welcoming it as being our right hand or assistance rather than a replacement? The answer is – as for now – individual.

I decided on experimenting as an attempt to find out whether AI can have a positive impact on an art project, for someone who normally paints the traditional way, like myself. I normally use regular pencils together with acrylics on canvas. I’ve collected plenty of images of twelve different paintings made by me and matched them up with a few different themes. During the process I created different GAN models (Generative Adversarial Networks) and generated the results thanks to AI or a neural network. The task is made through using unsupervised machine learning. 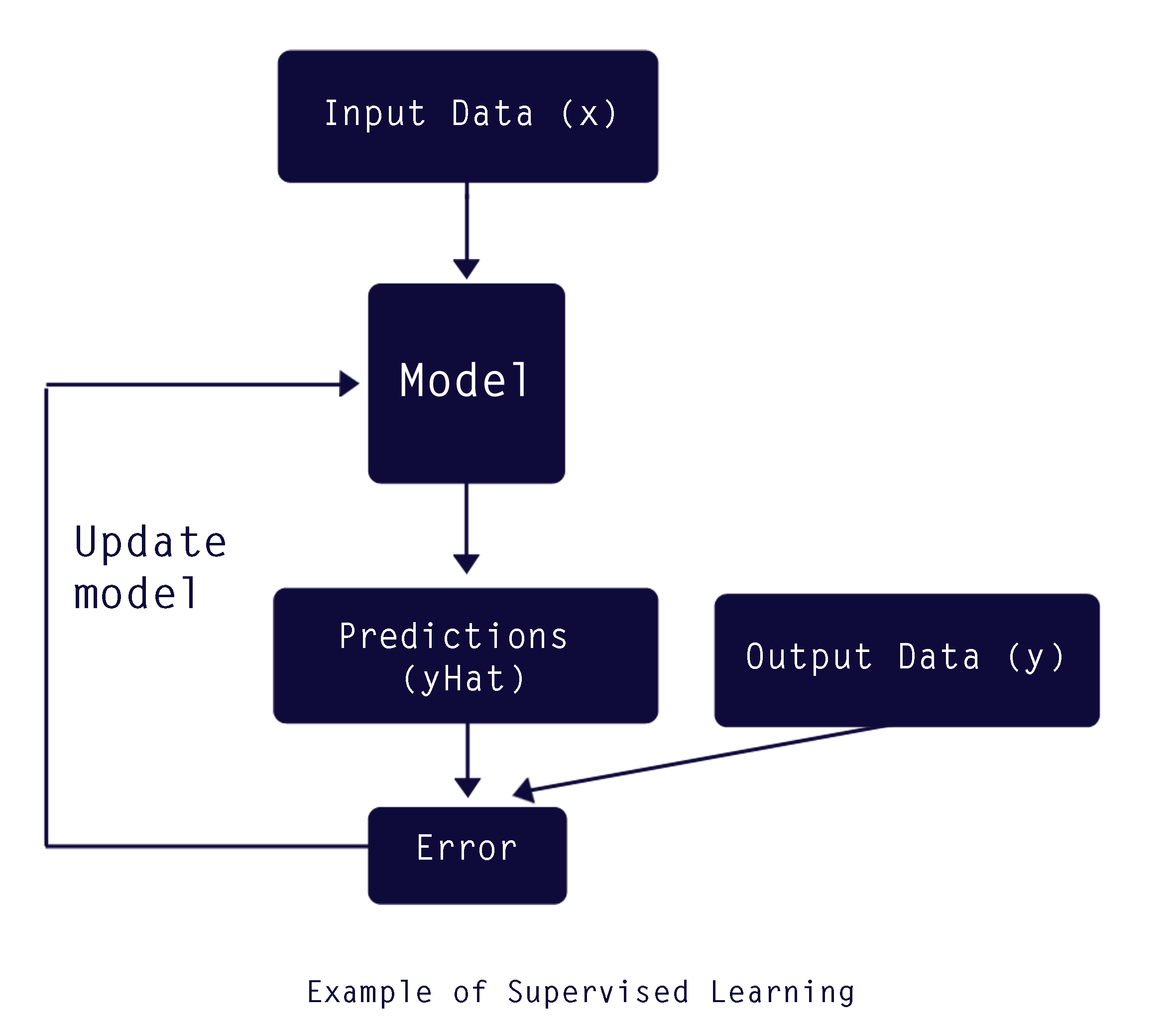 This involves automatically discovering and learning the patterns in input data in such way that the model can be used to generate new examples that look similar or identical to something that could have been drawn from the original dataset. In this case similar to my paintings. An example of this is an image of my friend Allegra, blended with a style-GAN model and below is the result, not too far from the acrylic painting to the left, is it? 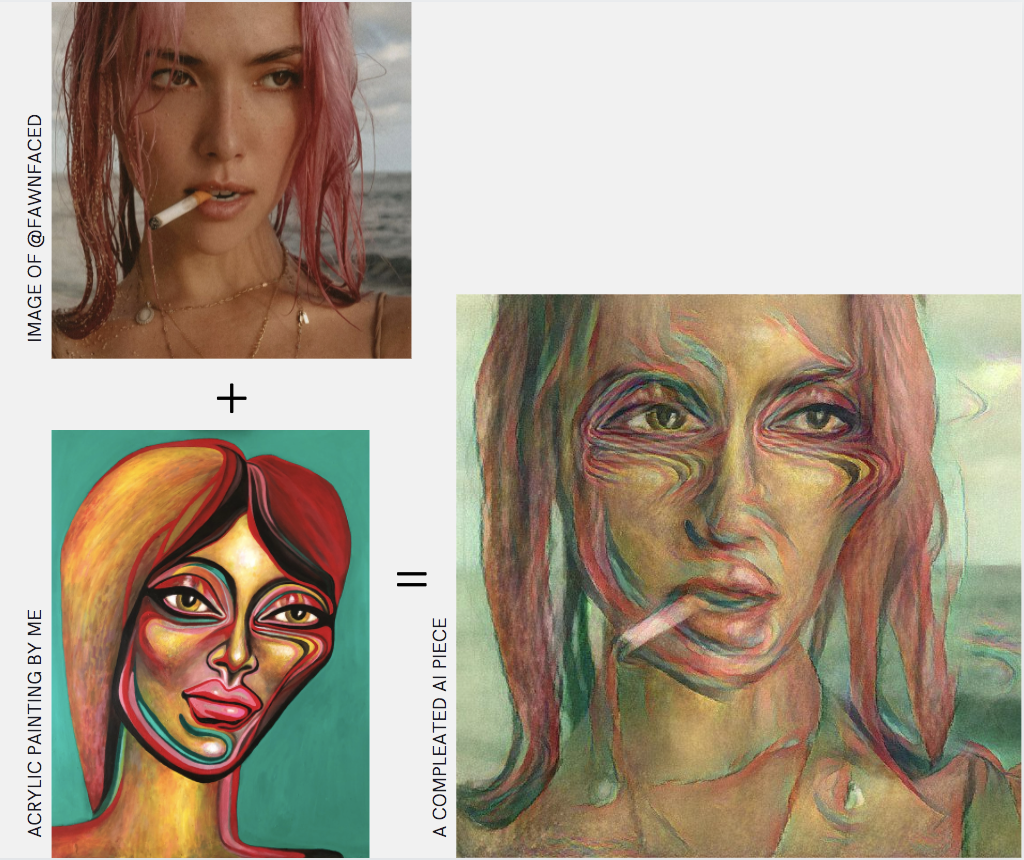 Further examples of the result of my style-GAN are seen here: 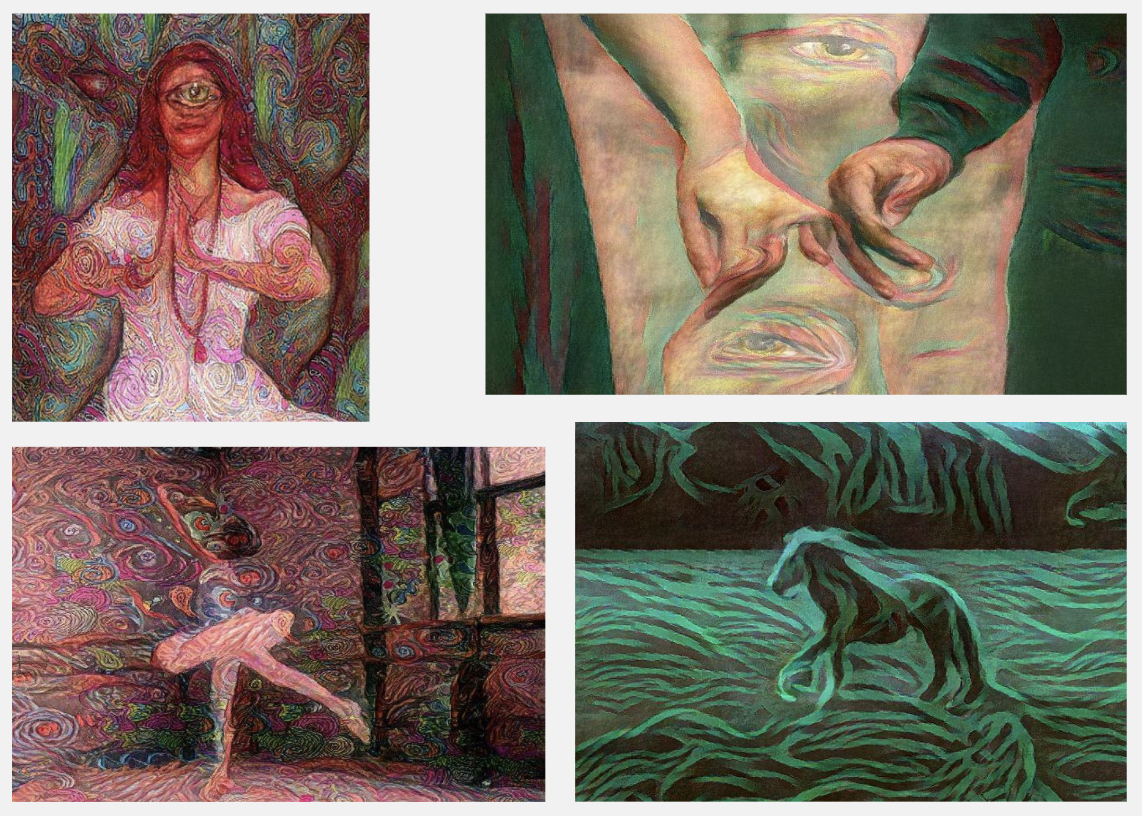 Strangely enough, these images look much like works I’ve painted by hand, only they are composed in a way I normally wouldn’t go about it. The images breed ideas in me and I truly feel like the range and wideness of what can be created is broadening my vision, even boosting my creativity as I find it connecting to inspiration. Maybe that’s exactly what this is – a tool for inspiration, or at least that’s a way one can decide to see it. However, a question I keep asking myself is; in the end, will the pieces still be considered human-made? The question applies to poetry and all sorts of AI generated artistic works. The inputs are still made by me, such as the ideas, themes and direction. However, in these cases AI can surprise you as an artist and provide with an unexpected direction that might be appreciated. AI comes with a suggestion, however, it’s up to the creative whether to use it or not, and how big part of it they’d like to use.

Furthermore, I wanted to dive deeper into the techy world of art and decided to generate poetry with help from, you guessed it: AI. I used a program called Sudowrite, a tool for writers created by James Yu. This program has plenty of data from a wide range of literature and poetry from a wide spread of genres. By feeding it with inputs and some sentences as a theme of content, the output is generated and the results blew me away:

I literally got addicted to this tool, yet fascinated by the depth as well as the red threads in these poems. I had some friends to read around ten poems, after telling them that half was AI generated, while actually all were. My friends were all surprised once they found out that none were human made. These poems are based on tons of data from already excising poetry. I didn’t even pick the heading, only the direction.

Below, to the right, you can see a completed physical painting that I made based on an AI generated piece. The left image is, just like the images above, made through using my style-GAN model. I decided to use inspiration from the AI generated image, in order to create something similar by hand. The actual painting is a meter tall and made using acrylic colors on canvas and I aimed towards using the left one as inspiration to paint something even closer to my own style.

Out-of-the-box thinking might go hand in hand with being creative, but what if you can take this to a further dimension? I would not say no to that whilst I’m stuck trying to figure out a direction for a painting, or a new way of a brushstroke. Although, I do not want AI to take over the direction completely, rather being an assistant in the process.

While researching on the subject and talking to artists within the field, a thought that interested me came throughout a conversation: “Imagine an artist sitting on a mountain, overlooking the landscape and painting a realistic image of the artist’s impressions. In this scenario the human could be considered the generator and the surroundings being the inputs. Then imagine another scenario where the artist uses AI as a tool to generate an image and then, inspired by the output, painting a canvas by hand. In both scenarios; the outcome is based on a source of inspiration and in both examples; the actual result is painted by hand. Then what are the actual differences if we play with the thought that the last example could be considered reversed AI usage and a source of inspiration with inputs of themes that are man made?”

Copyright law exists to protect creators who produce original material from unauthorized duplication or usage. In most countries, copyright law protects the work of originator until 50-70 years after their death. However, there is an ongoing debate on who should have ownership over something that is machine made.

In an article in DN, the artist Dan Wolgers hires an advertising agency to create an exhibition in his name and create something that could have been made by him whilst leaving him out of the entire process. The existence of the ego or self would be completely absent. The idea generated confusion and a big debate and confusion occurred within the art world. Who should be given the acknowledgement and recognition for the exhibition? These questions are important in the fields of AI generated works too, as the processes usually include a lot of people, programmers, data scientists, and the list goes on.

In February 2020, the World Intellectual Property Organization held a congress debate in the U.S. Copyright office on the topic of copyright in the age of AI. Andres Guadamuz asks the question of why we protect artist in the first place, and claims the answer is that the rights exists both for artistic protection and to ensure that artists can profit from their creations. He also states the importance of intention and to have an intention, you need an artist. Sophia is the first robot to ever receive a citizenship, the debate goes on and empathizes how Sophia, by all means could receive a copyright if she was to publish a creative work. But is that where the line should be drawn? How about the creators of other programs, machines or artistic AI tools that is out there? Should they get credits every time someone publishes a song, article or art piece based on something they have co-created or been a passive part of the process?

A court in Shenzen, China has decided that an article written by an artificial intelligence program has copyright protection. Tencent, a Chinese multinational versatile technology holding company, owns an Al article writer called Dreamwriter, which writes a half million articles per year. A competitor published an article from Tencent, and thereby got sued for copyright infringement. The defense tried to argue that the article had no copyright, since the author was non-human. The court agreed that the article has copyright, as it has originality, and that Tencent is the owner. A lot of similar dilemmas are occurring within the creative sector and slowly, regulations and guidelines are being shaped.

Another discussion on the topic that has gotten infected lately is how creativity is becoming democratic through AI usage. Using GAN models from Picasso, Dali or Rembrandt – anyone can create a hand-painted-looking image based on tons of data from famous artists. – All of this made possible without any technical or artistic skills in the first place. There are two major opinions on this subject. One is whether or not it should be considered ethical copying artists styles while others claims art should indeed be democratized.

According to an article on lexology.com, the question of whether or not the AI work can receive copyright – will be resolved on a case-by-case basis, this depending on the AI involvement. If the AI artist uses another artists StyleGAN models or code, the creator has to refer to the owner of these to be assured avoidance of copyright issues.

From researching on this topic, I more and more realize the importance of all people involved in digital creative processes of this sort, to be critical and asking themselves questions, as the answers are being shaped right now. Now is the time to draw ethical guidelines on AI usage for creators of all kinds to support their processes without further misconceptions.

Exploring AI is a new way for creators to go out of their boxes, and perhaps increasing innovation and creativity in the long run. Using one’s own inputs to find new ways of working should be a sustainable way of doing so. Furthermore, the creators of these tools should be given credits if parts of their works are being used, this to avoid conflictions and to support the possibilities for AI works to further develop.

As we are heading towards a new area of design, we have to broaden our visions and together, work towards finding sustainable ways to evolve.